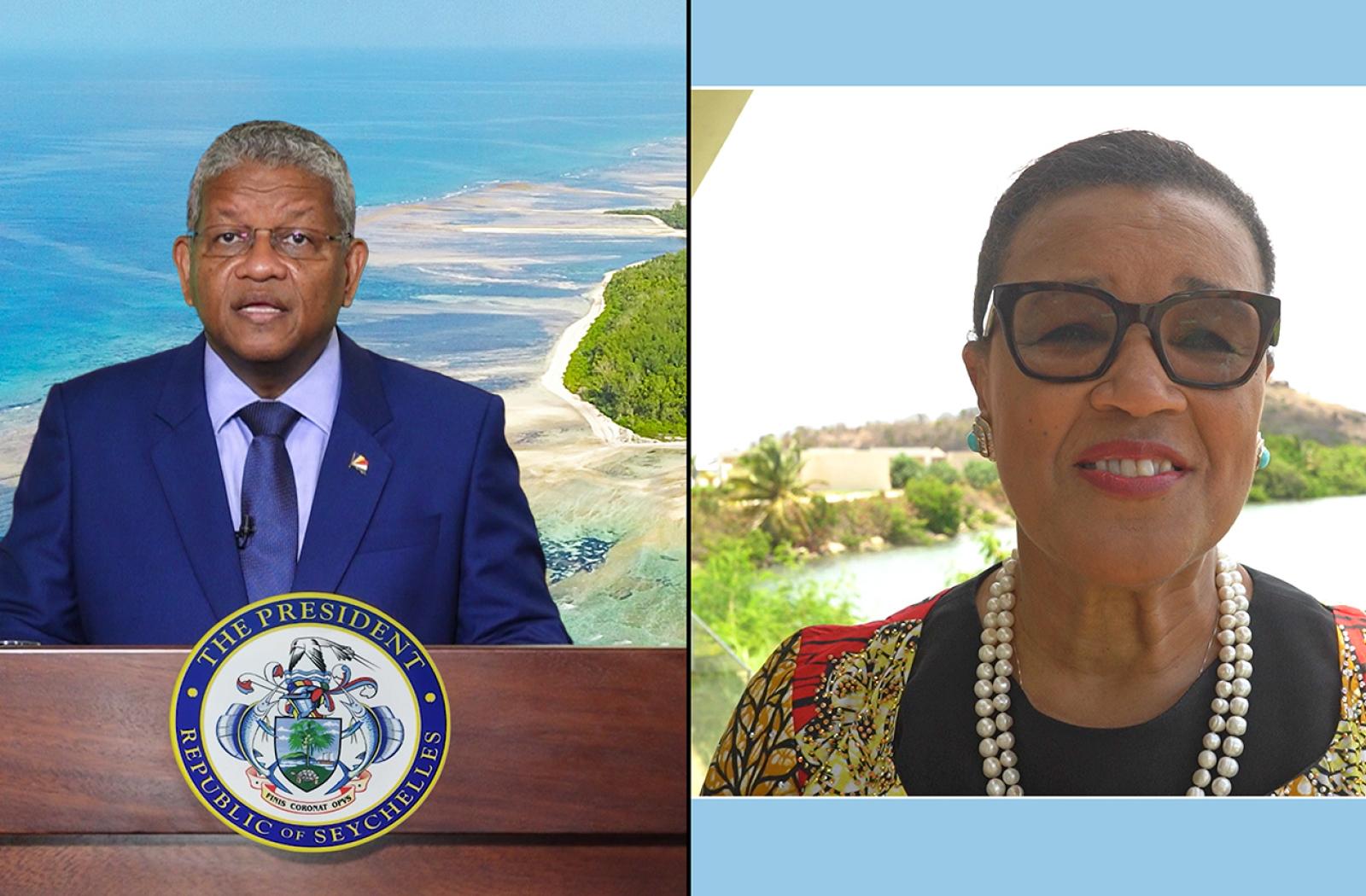 Multiple stressors on the ocean, including overfishing, marine pollution and climate change, are threatening life under water as well as on land, but global efforts to protect the ocean are underway.

To mark World Ocean Day (8 June), a panel of experts from across the Commonwealth led a virtual discussion on new and emerging issues around the management and financing of Marine Protected Areas to safeguard vital biodiversity and ecosystems.

Panellists included representatives from the Commonwealth Secretariat, the United Nations Environment Programme (UNEP) Finance Initiative, National Geographic, the Government of Belize, the Ocean Risk and Resilience Action Alliance (ORAA), and the JNCC – the public body that advises the British Government on nature conservation.

In his video message, President Ramkalawan reiterated the urgency of the topic, stating:

“We celebrate World Ocean Day this year at a time when our mother ocean, the origin of life on Earth, is under unprecedented stress. We are all being called to give and to be beacons of hope to solve the interconnected climate and biodiversity crisis that continues to worsen by the day.

“We firmly believe that we cannot create wealth and provide food, jobs, livelihoods, and a comfortable standard of living to our people, and tackle the climate and biodiversity crisis without a healthy, resilient and productive ocean.”

Secretary-General Scotland called for enhanced international support, including finance, to address these challenges. She said:

“Despite being our most precious resource, financing for the ocean is still by far the lowest of all the Sustainable Development Goals (SDGs). This is a sorry situation – which is as damaging as it is counterintuitive. We will pursue every avenue of advocacy that is available to us in order to change this.”

The Secretary-General applauded Seychelles and Barbados for stepping forward to co-champion the Action Group on Marine Protected Areas (MPAs) under the Commonwealth Blue Charter. The Blue Charter is an agreement by the 54 member states to work together to find solutions for ocean challenges, implemented by 10 Action Groups which are led by 16 Champion Countries.

Seychelles has designated about a third of its vast ocean space for protection, limiting fishing and harmful human activities in the area to allow for natural regeneration. It is one of four Commonwealth countries to do so, along with more than 30 that have pledged to protect at least 30 per cent of their national waters by 2030.

“The ‘30 by 30’ movement would have been inconceivable just ten years ago, when everyone was still focussed on just 10 per cent. Countries now fully recognise that the creation of well-managed MPAs is their best bet to safeguard the health and biodiversity of the world ocean and to mitigate many of the harmful effects of climate change,” noted Dr Jeff Ardron, who leads the technical work around the Blue Charter at the Commonwealth Secretariat.

Currently, only about 8 per cent of the ocean is currently designated as ‘protected’, with less than 3 per cent as ‘highly protected’. This means the vast majority of marine ecosystems are highly exposed to a multitude of human and natural stressors, such as overfishing. Around a third of the world’s fish stocks are already at unsustainable levels, according to the UN Food and Agricultural Organization (FAO).

However, experts on the panel said the solutions are clear and simple.

Quoting company research on ocean protection, Adrian Gahan, Policy Director for Pristine Seas at National Geographic said: “To save the ocean, we just need to leave it alone… If you fully protect an area from overfishing – after a number of years you will get 600% return in biomass, relative to adjacent unprotected areas. In a partially protected area, you will still get a 300% return.”

Adriel Castañeda, Fisheries Officer in the Belize Government added that technological advancements such as satellites and drones have made it easier and less costly to monitor and manage marine protected areas.

Dennis Fritsch, Senior Project Coordinator for Sustainable Blue Economy at the UNEP Finance Initiative, also pointed to a growing awareness in the financial sector about the tangible benefits of the ocean, and the need to strengthen sustainable blue economy principles and financial instruments.

Maya Delaney, an Associate at the Ocean Risk and Resilience Action Alliance (ORAA), shared their work towards guiding the growth of the ‘blue carbon’ market, in which the capacity for marine ecosystems to sequester carbon is monetised and traded fairly and transparently.

Louisa Fennelly, International MPA Lead Specialist at JNCC welcomed the increased knowledge she has witnessed across sectors, but urged further action: “Robust decision-making is evolving, and there is a lot more engagement from local communities. Everyone’s awareness of the importance of the ocean is increasing. But we can go a lot further than just business-as-usual.”

The event took place just two weeks ahead of the Commonwealth Heads of Government Meeting in Kigali, Rwanda, scheduled from the 20th until 25th of June, where ocean governance and increased support for the Blue Charter is on the agenda for discussion by leaders.

Watch the full recording of this event

Antigua and Barbuda to join Commonwealth coalition on mangroves